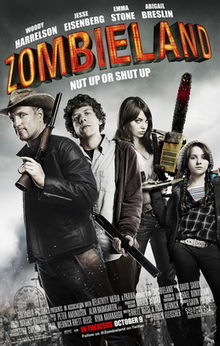 You ever find yourself watching a TV show or movie and have a “what if” moment regarding it? That is kind of what happens every time I watch today’s movie. See, this movie had originally been written as a TV series so every time I watch it I wonder what it would have been like as a TV show. Would it be a group of people going from city to city, having crazy adventures, or would each episode focus on a different person and what they would do. Unfortunately, we will never know as the TV pilot never came about and was instead, rewritten into today’s movie. Still, I won’t complain because zombie movies will always be entertaining. So let’s have some fun with today’s movie, Zombieland.

Zombieland met with high praise from the critics, holding a certified fresh rating of 90% on Rotten Tomatoes. The critical consensus on the site is, “Wickedly funny and featuring plenty of gore, Zombieland is proof that the zombie subgenre is far from dead.” As of 2017, all 4 lead actors have been nominated for Academy Awards in other movies, with Emma Stone being the only one to win an Oscar for her performance in La La Land. The movie was a success at the box office, earning $102.4 million off of a $23.6 million budget and was the top grossing zombie movie in the U.S. until World War Z came out. Due to the movie’s success, a sequel had been considered for years and the writers confirmed in 2017 that the script is finished and they are shooting for a tentative release date of October 2019, with all 4 main cast members returning for the sequel.

This is a fantastic movie and a lot of fun to watch. The acting was great, with Woody Harrelson stealing the show as Tallahassee. Jesse Eisenberg (Columbus), Emma Stone (Wichita), and Abigail Breslin (Little Rock) were also good in their roles and the chemistry between all 4 of them really helped get you invested in their characters. I loved the Bill Murray cameo and thought that it was a great interlude from the rest of the movie. The story was pretty good and one thing I did like as they didn’t focus on how the zombies came about, just dove right into the fact that zombies were around and took it from there (yes, they did say what caused the zombies but it wasn’t a major plot issue). I did like how Columbus’s rules would pop up every now and then throughout the movie, as well as the “Zombie Kill of the Week”, which was something from the original TV show script but carried over into the movie. The special effects with the zombies were pretty good while the humor was spaced out really well, not being continuous like in Shaun Of The Dead, but keeping things light-hearted enough so that it wasn’t a total horror movie. Definitely a great movie and one well worth seeing. 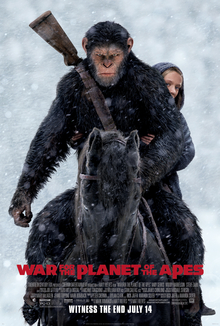 Happy Turkey Day everybody. I hope everyone is having fun spending time with family and going into food comas. Today’s movie is the latest installment in the rebooted Planet Of The Apes franchise. As soon as they announced the release date for this movie, I had it marked on my calendar to go see, as the first two installments were great. When the first trailer was released, that only whetted my appetite and made me even more impatient for the movie to come out. So let’s see how the adventures of Caesar and his tribe of intelligent apes plays out in the latest movie, War For The Planet Of The Apes.

War For The Planet Of The Apes met with high praise from the critics, holding a certified fresh rating of 93% on Rotten Tomatoes. The critical consensus on the site is, “War for the Planet of the Apes combines breathtaking special effects and a powerful, poignant narrative to conclude this rebooted trilogy on a powerful — and truly blockbuster — note.” There were numerous allusions to the original series of movies in this movie, from the Colonel’s unit being called Alpha-Omega )the same name as the bombs that the cult worships), to Maurice naming the girl Nova (the same name as the slave that fell in love with Taylor), and Caesar naming his son Cornelius (just as Caesar named his son Cornelius in Battle For The Planet Of The Apes). While the movie was the most highly rated movie according to critics, it did not perform as well as the previous installment but was still a box office success, earning $490.6 million off of a $150 million budget.

Man, this may not be the last installment in the series (as a 4th movie is being considered), but this was definitely one of the most powerfully, emotional movies in the series. This was an incredible movie and if this is how the reboot ends, then it went out on an incredible high note. The acting was incredible, with Andy Serkis delivering an absolutely amazing performance as Caesar. Woody Harrelson was equally good as the Colonel and the interaction between the Colonel and Caesar was really good. Karin Konoval (Maurice), Terry Notary (Rocket), Ty Olsson (Red), were also great in their roles, while Steve Zahn was pretty funny as Bad Ape. The story really was emotionally riveting, with Caesar constantly being haunted by Koba’s actions and worrying about his becoming just like him. The interaction with Maurice and Nova was also incredibly endearing, while Red’s conflict with Caesar and his eventual change of heart was also pretty pivotal and also helped to play a role in Caesar’s hallucinations regarding Koba. The final scene with Caesar and Maurice speaking, and Maurice actually vocalizing instead of signing, was incredibly emotional and appears to set up for the original Planet Of The Apes movie was incredible; especially the ending, where it seemed like Maurice was being primed for becoming the “Lawgiver”, the orangutan that passed down the history of how the apes rose to power and who has statues dedicated to him in the original movie. The special effects and motion capture effects were astounding and made the apes look incredibly realistic. I am serious, this is a fantastic movie and definitely worth watching.