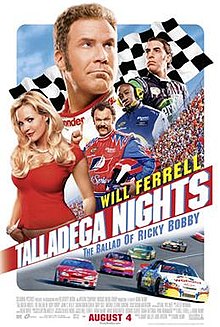 There are always going to be those movies that people will talk about or quote. Sometimes they are more dramatic or serious movies but usually, they tend to be comedies. That is definitely the case with today’s movie, as I know several people that like to quote various lines from this movie. My first introduction to this movie was not in theaters, but at a friends house after it came out on DVD, and was told to come watch it during a group movie night because it’s funnier with our friend Chris laughing at it (and I will admit his laugh is funny in it’s own right). Anyways, I enjoyed the movie and decided to pick up my own copy on DVD so let’s have some laughs with today’s movie, Talladega Nights: The Ballad Of Ricky Bobby.

Talladega Nights: The Ballad Of Ricky Bobby met with mostly positive reviews from the critics, holding a certified fresh rating of 71% on Rotten Tomatoes. The critical consensus on the site is, “Though it occasionally stalls, Talladega Nights’ mix of satire, clever gags, and excellent ensemble performances put it squarely in the winner’s circle.” Wonder Bread, Old Spice, and Perrier were not charged for the product placement in the movie but Wonder Bread and Old Spice did promote the movie through back-end deals. The movie was a box office success, earning $163 million off of a $72.5 million budget.

Every time I watch this movie, I still hear Chris’ laugh, which makes me laugh even more. This is a very funny movie and definitely something that can make you laugh when you need it. The acting was really good, with Will Ferrell (Ricky) and John C. Reilly (Cal) making for a great comedic duo, but everyone was really good in this movie. The story was pretty good, with some serious moments added to the more ridiculous parts to balance out the movie. The humor was a mixture of various styles, with some more adult or risque than others, but I enjoyed the occasional slapstick that was thrown in. A great comedy and one that is well worth watching.