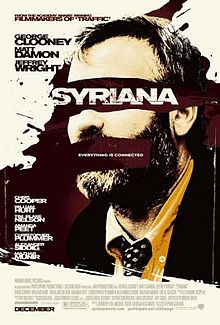 Well, I find myself finishing up with the letter “S” today. Once again, I find myself with a movie that I never saw in theaters, though I had several friends saying it was really good. So based on their recommendations, I decided to pick up a copy on the cheap when Blockbuster was going out of business. I think I might have to figure out how many of my spur of the moment Blockbuster purchases during that time period were based solely on friends’ recommendations. Anyways, let’s get down to business with today’s movie, Syriana.

Syriana met with positive reviews from the critics, holding a certified fresh rating of 73% on Rotten Tomatoes. The critical consensus on the site is, “Ambitious, complicated, intellectual, and demanding of its audience, Syriana is both a gripping geopolitical thriller and wake-up call to the complacent.” George Clooney suffered a spinal injury during a stunt and, due to the weight he gained for the role, he was bedridden for a month and suffered migraines, causing him to miss out on doing promotional work for Ocean’s Twelve. The movie was a modest hit at the box office, earning $94 million off of a $50 million budget

This is a good movie but I feel like it was made overly complicated and more confusing than it needed to be. The acting was good, with George Clooney (Bob) and Jeffrey Wright (Holiday) doing great jobs in their roles. Matt Damon (Bryan) was also good, though felt a little mechanical at times, while Alexander Siddig did a much better job portraying Nasir. The story was pretty good but all the different storylines that were going on made it a little confusing to follow, as they were forced to bounce around the different plots and couldn’t really focus on any one point for too long. The special effects and the drama were both effectively used throughout the movie and did help move things along, but the bouncing story line really did hurt it. A good movie but definitely something you will have to focus on in order to understand everything going on.