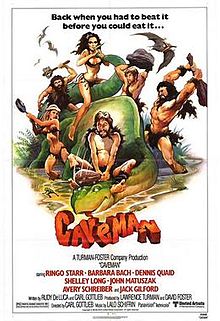 Well, looks like I get to finish out the week with a dinosaur movie. Now I remember seeing a small portion of this movie years ago and thinking it was absolutely ridiculous. It would be years later before I would finally be able to watch the whole movie, and that was honestly by random fluke of luck. I was up late and this movie just happened to be on so why shouldn’t I watch it. When I went on a dinosaur buying binge a while back, I decided to throw this movie in to the pile in order to add a little difference to the mix. Now, let’s see if I still find Caveman entertaining.

Caveman met with poor results from the critics, holding a 24% rating on Rotten Tomatoes. While there isn’t a critical consensus on the site, most of the critics felt that while there were some laughs to be found, the lack of originality hurt it’s chances of being a better comedy. When Barbara Bach heard who was going to be starring in the picture, she was disappointed as she felt the role should have gone to a more accomplished comedian like Dudley More. However, after her first meeting with Ringo Starr, the two ended up falling in love and marrying 10 months later. The movie was a box office success, earning $15.9 million dollars world wide.

This is another one of those stupid 80’s comedies but it is still able to make me laugh. The acting was good, with Ringo Starr (Atouk), Dennis Quaid (Lar), John Matuszak (Tonda), and Shelly Long (Tala) doing great jobs in their roles. Barbara Bach was also good as Lana, though her main role was basically to look pretty (no, I seriously think that they told her to just look pretty and seductive all the time), while Avery Schreiber (Ock) and Jack Gilford (Gog) made for some great comedic characters. The story was pretty basic, with the whole outcast group going up against the more popular/dominant group which has been done over and over again. The special effects regarding the dinosaurs were honestly a little cheap, looking very much like the claymation/models that they were, but the googly eyed aspect of them actually made them pretty funny. It’s a silly bit of a rom/com but one that is able to provide some laughs.