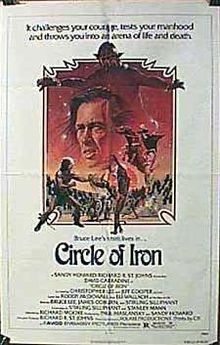 Another Sunday morning, another movie to watch from Shout Factory TV. Lucky for me, they have plenty of movies to choose from. Now I chose today’s movie because of the history behind it. See, today’s movie was originally co-written by Bruce Lee, who had intended to star in it but was unfortunately killed before he could start working on it. A couple of years after his death, Stirling Silliphant, one of the other co-writers, completed the screenplay and David Carradine was cast to play the role intended for Bruce Lee. So let’s see what kind of movie we have on out hands as I watch Circle Of Iron.

When Circle Of Iron first came out, it received mainly negative reviews but has since garnered a cult following, causing some critics to reassess the movie, hence it’s current ranking of 43% on Rotten Tomatoes. While there isn’t a critical consensus on the site, several critics felt that the lack of Bruce Lee’s charisma and guidance caused the movie to not reach it’s true potential. Bruce Lee envisioned Circle Of Iron to be an introduction for Western audiences to Eastern philosophy and the movie was originally supposed to be shot in 1969, with Steve McQueen offered the role of Cord but he turned it down. The flute that David Carradine plays throughout the movie is the same flute he plays in Kill Bill: Vol. 2. The movie made $1 million, but most of that was through video rentals and not the box office.

Well, the movie is definitely slow enough to fit being a philosophical movie, but didn’t exactly keep the interest peaked enough to make it good. I will be honest, even if Bruce Lee was in it, I don’t know if this movie would have been any better. The acting was good, with David Carradine doing a great job playing the multiple roles of the blind man, Monkeyman, Death, and Chang-Sha. I honestly think he had some fun playing the different roles. Jeff Cooper was also good as Cord and but I thought that Christopher Lee was a little wasted as Zetan, as his presence honestly felt a little anti-climactic to me. The plot was pretty slow paced and even the few fight scenes were pretty slow, making this movie a little boring and hard to pay attention too. The fight scenes were pretty well choreographed but the slow pacing just didn’t make them exciting at all. I know that the focus was supposed to be on the philosophical aspects but they still could have made the few fights that were included to be a little more exciting. It’s a decent intellectual movie but the slow pace is not going to attract to many people to watch it.