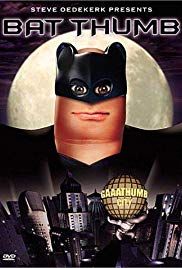 If there is one thing to be said about today’s movie, the creator had his thumbs all over it. I know, it’s a bad joke but it is true with this movie. Yes, the success of Thumb Wars brought about several other thumb infused parodies. Today’s movie is one that somehow ended up in my house and in my collection over the years. I’m not going to complain too much as a short comedy and some laughs, even if it is over how stupid something is, is always good for the soul. So let’s have a few laughs with today’s movie, Bat Thumb.

The plot: In Gaaathumb City, two crooks mug a tourist and escape down an alley but as they are splitting up the loot, they are confronted by Bat-Thumb. The crooks try attacking him with a board but when he breaks it, they make a run for it. Bat-Thumb captures them both and tries to get them to deliver a message to the rest of the criminals in Gaaathumb but the crooks aren’t exactly sure what he is trying to say. Later that night, Wuce Bane is hosting a party at his mansion when he meets Vicky Nail and after talking for a bit, the two proceed to make out. The next day, the Gaaathumb bank is robbed by No-Face and his gang. The bank manager calls the Commissioner and Police Chief, who contact Bat-Thumb. At Wayne Manor, Wuce is lying in bed with Vicky when the Thumbphone rings, and he tries to answer it without revealing his secret identity to Vicky. Wuce heads to the Batburrow to change and quickly heads over to the bank to meet with Commissioner and Police Chief. After they discuss who robbed the bank, Bat-Thumb prepares to head to No-Face’s old lair when he is approached by a young man claiming to be his sidekick Blue Jay. As Commissioner and Police Chief laugh and mock Bat-Thumb for his sidekick, Bat-Thumb tries to get rid of the kid and then heads off to No-Face’s lair. When Bat-Thumb arrives, he sees Blue Jay approaching and tries again to get rid of him but when Blue Jay starts crying, he reluctantly agrees to let him help. The two make their way inside and confront No-Face and his gang, who mock Blue Jay’s costume, but as Bat-Thumb deals with No-Face’s men, and Blue Jay consistently runs from them, No-Face catches them in a net. Strapping them to tables, No-Face explains his plan to use a special gas to erase the faces from everyone in Gaaathumb. No-Face leaves, leaving Bat-Thumb and Blue Jap in a trap that will erase their faces but Bat-Thumb is able to get free and save Blue Jay, then they head out to save Gaaathumb. In the city, No-Face has captured Vicky and begins using a gas to erase the face from everyone in Gaaathumb but Bat-Thumb and Blue Jay arrive and Bat-Thumb uses a giant fan to blow the gas away. No-Face is captured and as Vicky thanks Bat-Thumb for saving her, the people that were effected by the gas ask what will happen to them and Bat-Thumb says that they will stay that way forever. As Vicky, Commissioner, and Police Chief thank Bat-Thumb, Blue Jay shows up and they start laughing at him, though Bat-Thumb says that he will take him on as his sidekick, but they need to do something about his costume.

This is so stupidly funny that you can’t help but laugh at it. The voice acting was pretty good, though I have to admit it is still a little odd seeing people’s faces on thumbs. The story was kind of a mixture of the Tim Burton Batman movies and the old Adam West show, which is honestly a pretty weird mixture. The background settings were decent while the green screen effects for putting the faces were ok but I keep wishing it was done a little better. It is some stupid comedy that can give you a couple of laughs but isn’t worth hunting down to watch.