You ever go looking at a DVD and wonder why you own it, or how for that matter? That is the first thing that comes to mind regarding today’s movie. I mean, obviously I bought the movie but I don’t remember when or why for that matter. I have never seen this movie before so I can’t really say what would have motivated me to buy a movie I have never seen, with a subject matter that would not necessarily make for a leap of faith purchase like this. Well, no choice but to go ahead and see what I have with today’s movie, Truth Or Consequences, N.M.

Truth Or Consequences, N.M. met with mostly negative results from the critics, holding a 38% rating on Rotten Tomatoes. While there isn’t a critical consensus on the site, most of the critics felt that it was a decent thriller, though somewhat unoriginal in it’s scope. Despite the title of the movie, no filming took place in Truth or Consequences, New Mexico, as all the filming took place in Utah and Nevada. The movie received a limited theatrical release, which some feel is why it didn’t get more critical reviews, and only earned $122,046 during it’s run.

Going in unawares, I have to admit that this is not that bad of a movie. The acting was pretty good, with Vincent Gallo (Raymond), Mykelti Williamson (Marcus), Kim Dickens (Addy), and Kiefer Sutherland (Curtis) all doing good jobs in their roles. I have to admit that Kiefer pretty much stole the show with his performance while Mykelti showed a much wider range of acting, which probably will surprise most people that only know him as Bubba from Forest Gump. I will admit that the story was a little unoriginal and honestly felt like it was kind of a poor man’s Tarantino movie stylistically. That being said, this was a pretty solid, albeit slow-paced, thriller. The drama was pretty good while the action scenes added some intensity to suck you in even further into the story. It might not be something that knocks your socks off but this is worth giving a shot. 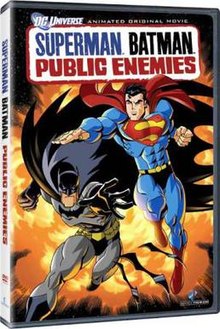 While I have always been more of a Marvel Comics guy as opposed to DC, I have read some DC comics over the years. I remember reading several comics as a kid featuring 2/3 of DC’s famed trinity, Batman and Superman. The two have teamed up in the comics numerous times and had their own series once or twice, with a recent one starting up in 2003. Today’s movie is actually based on that series, taking the first 6 issues and turning them into a new animated movie. While it takes place during DC’s new animated universe of movies, it is technically not a part of the DCAU but that isn’t going to stop me from enjoying today’s movie, Superman/Batman: Public Enemies.

This is a really fun movie to watch. The voice acting was great, especially since they had Tim Daly, Kevin Conroy, and Clancy Brown all reprising their roles from as Superman, Batman, and Luthor from the original Batman/Superman/Justice League cartoons from the 90’s/2000’s. I also liked that they brought back CCH Pounder to reprise her role of Amanda Waller, while Xander Berkley and Allison Mack did good jobs in their roles of Captain Atom and Power Girl. The story was pretty good, though I can’t say for certain how closely it matches with the comics as I haven’t read them yet. I liked that they kept the friendly, semi-combative banter between Superman and Batman, showcasing the mutual respect they have for each other. I also liked how Luthor accuses Superman of being driven mad by the Kryptonite while he himself is actually the one going mad. The animation was really good, though some of the characters, like Power Girl, looked a little too angular in their design. Minor flaws aside, this is a good movie and definitely worth watching.