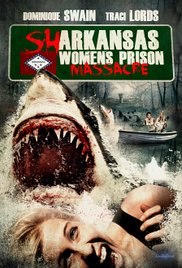 Admit it. The second you saw the title for today’s movie you immediately thought it was either going to be a soft-core late night skin flick or nothing more than a bunch of girls running around with next to no clothes on. Well, when I first heard about this movie, and that Jim Wynorski was the director, that was pretty much my first thoughts. Well, if you were thinking the same thing, you weren’t that far off on the second one but there are no sex scenes so this can’t be considered a skinamax type movie. In either case, this fits into a couple of niches for me, shark movie and Wynorski film, so let’s see how much fun we can have with today’s movie, Sharkansas Women’s Prison Massacre.

This was a pretty ridiculous movie to watch but it did have it’s funny moments. The acting was ok, with Dominique Swain (Honey), John Callahan (Carl), and Christine Nguyen (Michelle) doing pretty good jobs in their roles. I honestly thought the little side story with Traci Lords (Kendra) and Corey Landis (Adam) made no sense and seemed to be there just to add time to the movie. The story was interesting, with the idea of fracking releasing the prehistoric sharks from an underground ocean being a nice idea. The shark design looked pretty good and I liked the small spikes all over the shark’s body that were supposed to help the shark burrow through the ground, as that had been used in other movies, most notably in Tremors. The rest of the special effects were a little less to be desired, but they actually made for some funny viewing at times. Probably not what you were expecting but it can be fun to watch.