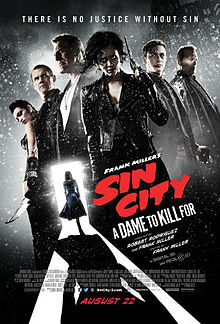 Whenever I think of this movie, the phrase “Strike while the iron is hot” always comes to mind. Now I know the literal meaning of the phrase has to do with smithing and metal working but it also has come to mean take advantage of an opportunity when it presents itself. In Hollywood, this means that if you have a successful movie, you should try and do a sequel fairly quickly in order to take advantage of people’s liking the first movie enough that they would want to see the sequel. In regards to today’s movie, Sin City: A Dame To Kill For, several reasons kept this movie from being filmed immediately after, which probably contributed to it’s failure at the box office.

Sin City: A Dame To Kill For met with mixed to negative reaction from the critics, holding a 42% rating on Rotten Tomatoes. The critical consensus on the site is, “A Dame to Kill For boasts the same stylish violence and striking visual palette as the original Sin City, but lacks its predecessor’s brutal impact.” The movie was a mixture of original “Sin City” stories (“A Dame To Kill For” & “Just Another Saturday Night”) as well as two new stories (“The Long Bad Night” & “Nancy’s Last Dance”), which were written exclusively for the film. Although the character of Shellie played a part in the story “A Dame To Kill For”, Frank Miller and Robert Rodriguez decided to retire her in the film version in respects to the late Brittany Murphy, who played her in the original movie, but they could not do the same for Manute’s character, as he played too big a role in the story. The movie was a box office bomb, only pulling in $39.4 million off of a  $65 million budget.

The sequel curse definitely hit this movie but this is still a pretty good movie. The acting was good, with Mickey Rourke (Marv), Joseph Gordon-Levitt (Johnny), Josh Brolin (Dwight), and Powers Boothe (Roark) doing a good job in their roles. I also liked Dennis Haysbert, who did a good job in taking up the role of Manute following Michael Clarke Duncan’s death. The two stories that were already written were great and I did like the new story “The Long Bad Night” and while I did think it was interesting to see the effect Hartigan’s death had on Nancy, I thought the “Nancy’s Last Dance” story felt too much like a fan service fluff piece in order to appease fans who wanted to see more of Jessica Alba. The film technique and special effects were just as good as the original movie and the occasional bits of color really added to the visual aspect of the movie. Not as good as the original but definitely a fun movie to watch.