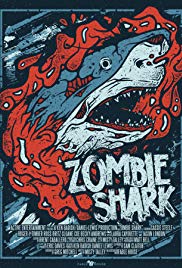 A sad way to start the day as I watch the last shark movie in the Shark Bait set. Well, let me rephrase that. This is the last shark movie that I did not already review. See, this set also included Swamp Shark, but since that movie got it’s own DVD release several years ago, it has already been reviewed on my site. Anyways, let’s get on with today’s movie. Now this movie had debuted 4 years ago during Sharknado Week, but I missed it. In fact, I somehow managed to miss it every time Syfy aired it for the next two years. Last year I finally got a chance to watch Zombie Shark and…..the wait was not exactly worth it. Let’s see if a little bit of time, and keeping my expectations a little more even, will make it more enjoyable this time.

So I gave it another shot and I have to say, I am honestly on the fence regarding this movie. There were some aspects of it that I liked and some that I didn’t. The acting was decent, with Jason London (Cage) and Roger J. Timber (Lester) doing good jobs in their roles. I also thought that Sloane Coe (Sophie) did a good job but I was a little disappointed with Cassie Steele (Amber). It might be more due to the writing than her actual performance because her character just seemed to be overly whiny at times. The story itself was pretty decent, playing a little bit off of the plot from Deep Blue Sea, and adding a nice zombie twist to it. I do wish they actually showed more of the whole zombie aspect, because this was mainly just a normal shark movie for the most part, with only a few times where the shark’s didn’t die showcasing the zombie aspect. I will say that Lester made for some great comedic scenes, especially in the battle on the beach where he stabbed a shark through the mouth with a machete, causing the machete to stick out of it’s head, only for the shark to swim off and use it’s new machete to sever one guys arm, and later stab Cage in the leg. The special effects were about what you would expect for this type of movie, but they did add to the humor in a lot of the scenes. One thing I didn’t care for was the camera work during several of the underwater scenes. I don’t know if it was intentional but they made the water look soo murky that the sharks didn’t look very clear. So there are a couple of faults but it can still be an enjoyable movie on the whole.