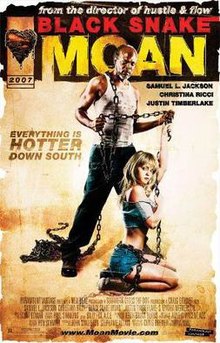 Now this is one of those movies that when you first saw the trailer for it, you didn’t quite know what you were going to get. I mean, is this a racially charged drama or some sort of a soft core porn disguised as a big budget picture. I have to be honest, nothing about this movie really enticed me into seeing this movie in theaters when it first came out. About a year later, during a dark time in my life, I wound up renting it from Blockbuster only to have the copy I rented be damaged and unable to play. I took it back and tried to grab another copy only to find they were all out. Well, this just served to make me want to watch it even more and I ended up just buying a used copy, because at the time it made sense. So that, dear readers, is how I ended up with a copy of Black Snake Moan, yet another of my random Blockbuster purchases.

Black Snake Moan met with positive results from the critics, holding a 66% rating on Rotten Tomatoes. The critical consensus on the site is, “Uninhibited performances, skillful direction, and a killer blues soundtrack elevate Black Snake Moan beyond its outlandish premise.” In the party scene, a guy suggests getting high on Coricidin. The pharmacist in the movie, is the spokesperson in the Coricidin HBP commercials. The same year, Samuel L. Jackson and Christina Ricci co-starred in Home of the Brave (2006), which also starred Justin Timberlake’s wife Jessica Biel. The movie was a box office bomb, only earning $10.9 million off of a $15 million budget.

Well, it wasn’t quite what I expected, which is actually a good thing. This is a slow paced movie but is actually pretty decent. Samuel L Jackson (Lazarus) and Christina Ricci (Rae) did great jobs in their roles and I liked the interaction they had with each other; especially towards the end when they started treating each other as a sort of surrogate family. The story was a little disturbing to be honest, as I feel like it was intentionally made to make people feel uncomfortable. Seeing how it was set in the South, there was a bit of a racial overtone, one which Lazarus commented on when he told R.L. about what would have happened had he gone to the police with Rae when she was beat up. The sexual drama seemed rather over the top, even the times Rae was drugged up. I don’t know if this is going to be one of those cult cinematic movies that will be looked at favorably years later, but I can say that it is at least worth a watch.