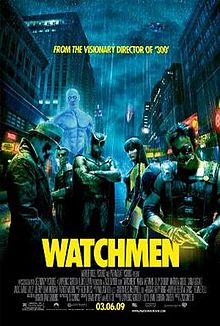 If there is one thing that most comic fans can agree on, it is that Alan Moore is kind of a twisted genius with his story telling. I mean, the series, and one shots, that he has written are some of the most talked about stories by fans and non-fans alike. So it makes sense that these stories would be turned into movies, as the comic movie business was really starting to bloom at the turn of the century. Now I read this limited series when I was a kid and I know I didn’t have the understanding of what was going on back then that I did when I re-read it before the movie came out. Now, let’s see how well the movie holds up as I watch, The Watchmen.

The Watchmen met with mixed to positive results from the critics, holding a 68% rating on Rotten Tomatoes. The critical consensus on the site is, “Gritty and visually striking, Watchmen is a faithful adaptation of Alan Moore’s graphic novel, but its complex narrative structure may make it difficult for it to appeal to viewers not already familiar with the source material.” When the trailer first premiered during The Dark Knight, it created so much interest in it that it caused the graphic novel to end up back on the bestseller list and Barnes & Noble reported selling out nationwide. The movie was a modest success at the box office, earning $183.5 million off of a $138 million budget.

Despite the rather dark tones it took, this was a pretty good comic book movie. The acting was good, with Jackie Earle Haley and Jeffrey Dean Morgan doing great jobs as Rorschach and Blake respectively. I also liked Billy Crudup’s stoic portrayal of Dr. Manhattan, as it really fit with the character and his losing touch with his humanity and emotions. The story followed the comic pretty closely, with the only real big change being Veidt’s plan, as in the comics he faked an alien invasion that destroyed the cities instead of framing Dr. Manhattan for it. The fight scenes in the prison were pretty well done, and I liked the fight in the Antarctic, but I thought the fight in the alley between Dreiberg, Laurie, and the muggers, was too slow, and I know it was somewhat deliberate in it’s filming but it still seemed overly slow. The special effects were pretty good all around but I think we could have gone with out repeatedly seeing Dr. Manhattan’s crotch in that once scene. Yes, it is dark and yes, there are some parts that people won’t like, but this is still a good movie that is worth giving a shot.