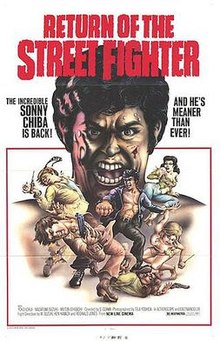 Ahhh, a Saturday morning and I find myself watching a martial arts movie. That is really a flashback to my childhood, though the movies would usually come on in the afternoons, as I obviously needed to watch my Saturday morning cartoons first. Anyways, today’s movie is the first of two sequels to The Street Fighter and luckily for me, it happened to be a part of the Martial Arts box set. So let’s see what happens to Terry Tsurugi with today’s movie, Return Of The Street Fighter.

Not as extreme with the violence but this was still a pretty good movie. Sonny Chiba did a good job in his role and I feel like he actually had a lot more character development with this movie than he did in the first one. I also liked Masafumi Suzuki returning as Masaoka but felt like Masashi (Milton) Ishibashi’s return as Junjo was a little anti-climatic. The story was pretty good, with Terry still working as a mercenary but showing a little more honor in how he handles his contracts. There were a lot more fights in this movie than in the previous and they were pretty well choreographed (such as the fight in the spa)  but the violence was toned down some, such as leaving out the x-ray scenes of various broken bones and some of the more violent death scenes. However, they did decide to leave in one of the funniest scenes I have seen in a serious martial arts movie. When Terry was facing the assassins on the mountain top, he punched one of them in the back of the head and….welll…

Needless to say, this had me cracking up for how ridiculous it was. That aside, this is a fun movie to watch and a great way to indulge in some mindless action cinema.