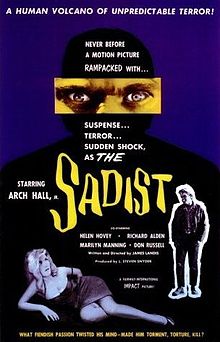 The Sadist (1963) met with high praise from modern critics, holding a 100% rating on Rotten Tomatoes. While there isn’t a critical consensus on the site, the critics all seem to feel that it was a well made thriller and praised Arch Hall Jr.’s performance. The movie was based on the killing spree of Charles Starkweather and his girlfriend Caril Ann Fugate, who murdered 11 people in Nebraska and Wyoming between 1957-58. The cops in the movie were actual off duty police officers who have their own bikes, which they use for funeral processions and VIP escorts.

I will admit, this was a very effective thriller. The acting was really good, with Arch Hall Jr. doing a phenomenal job in his roll, going from sadistic bullying the teachers to maniacally giggling with Judy and back again in mere seconds. Richard Alden (Ed) and Helen Hovey (Doris) were also good in their roles. The story was great, bringing a sense of real terror and drama throughout the movie from the moment the three teacers arrive at the abandoned junkyard. The special effects were minimal but the camera work was exceptional, actually making the tension more palpable so that it felt like you were the one being hunted by Charlie. A surprisingly good movie that is worth watching if you are in the mood for it.