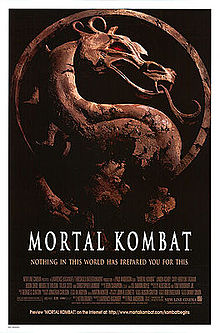 12 hour work days suck and a week of them is going to be pretty brutal but it will make the weekend that much more relaxing if I manage to survive. Now I don’t think there is a single kid that was alive in the early 90’s that did not play, or at least see someone play a rather violent arcade game called Mortal Kombat. Man, were the parents and censors in an uproar over this game because of the fact that after beating your opponent, you could perform a “fatality” on them, which were often rather brutal ways to kill your opponent. So with all the press surrounding the game, and since there were already movies in the works for two other popular video games, Super Mario Bros. and Street Fighter, it only made sense to try and make a movie based on this game. So let’s see just how good of a job they did with today’s movie, Mortal Kombat.

Mortal Kombat did not get a lot of positive reviews from the critics, earning only a 33% on Rotten Tomatoes. The critical consensus on the site is that, “Despite an effective otherwordly atmosphere and appropriately cheesy visuals, Mortal Kombat suffers from its poorly constructed plot, laughable dialogue, and subpar acting.” The audiences didn’t seem to care, as the movie would be # 1 at the box office for three weeks in a row and would ultimately make over $122 million worldwide, making it the 4th highest grossing video game movie of all time as of 2014. The soundtrack for the film, primarily a mix of techno and industrial music, also enjoyed success as it would go platinum after two weeks of being released.

As far as video game movies are concerned, this wasn’t bad but it could have been better. Admittedly, the acting was a mix of being decent and being pretty bad but I will give props to Robin Shou (Liu Kang), who also had to serve as fight choreographer for some of the fight scenes. The story was pretty good, staying fairly close to the video game while making some changes to it that honestly didn’t detract from the movie. Some of the computer animations were good, especially the backgrounds but I was a little disappointed with Reptile’s lizard form. To be honest, my favorite part of the movie is the soundtrack but this is still an entertaining movie, in spite of it’s flaws.