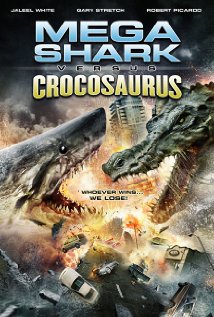 You just can’t keep a good idea for a shark movie down. After the cult success of Mega Shark Vs Giant Octopus, The Asylum decided to make a sequel. However, while there would be some references to the original movie, none of the original stars would make an appearance so a new cast was needed as well as a new monster to fight. Now I was excited to hear about a new movie but there was one thing that had me concerned. Exactly how good would “Urkel” (Jaleel White) be starring in Mega Shark Vs. Crocosaurus?

The plot: At an illegal diamond mine in the Democratic Republic of Congo, a tremor occurs in the cave, unleashing a giant crocodile that proceeds to kill most of the people at the mine. Meanwhile, the USS Gibson is out in the Atlantic Ocean when they pick up a strange signal in the water. Lt. Terry McCormick, a shark expert doing research on the ship, believes it might be the megalodon but the ship’s captain dismisses him. Terry gets the hydrophonic sphere that he is working on and wants to try and repel the shark but before he can use them, the megalodon attacks the ship. Terry goes looking for his fiance but finds her dead and realizing that the ship is going to be sunk, he quickly dons a wet-suit and is the only person to survive the wreckage. Back in the Congo, an Enlishman named Nigel Putnam is hired by a woman named Legatt to deal with the creature that chased off the workers at the coal mine owned by the company she represents. When they arrive at the site, they find the place deserted when Legatt is suddenly killed by the crocodile. Putnam ducks inside a small cave but when the crocodile chases after him, he uses his tranquilizer sticks on the crocodile as it swallows him whole, knocking out the crocodile, allowing him to climb out of it’s mouth. Putnam calls his friend Jean, who owns a cargo ship, and arranges to have the crocodile transported out of the country. In Los Angeles, Terry is being questioned about the events of the USS Gibson when the interrogation is interrupted by Agent Hutchinson from the N.O.A.A. (National Oceanic & Atmospheric Administration), who wants Terry to help find and kill the megalodon. Terry agrees as he believes it was his fault that the megalodon attacked the ship. Meanwhile, Putnam is onboard the ship carrying the crocodile, as well as the eggs he found, when they suddenly come under attack by the megalodon. Putnam is forced to jump off the ship as the crocodile wakes up and escapes from the ship. Terry is taken to the USS Lexington and meets Admiral Calvin, who explains that this is an elite team that is assembled for the sole purpose of hunting down the megalodon and Terry agrees to help find it. Meanwhile, Putnam ends up washing ashore on a nearby island and is picked up by Agent Hutchinson, who questions him about the shark but when she learns about the crocodile, she brings him back to the Lexington. On board the Lexington, the crew have been tracking both the shark and the crocodile and Calvin sends Putnam to retrieve some newly discovered eggs, sending Terry and Hutchinson along as well. Reaching the site, Terry works on his sonic equipment while Putnam and Hutchinson go looking for the eggs. Seeing that the eggs go all along the coastline, Hutchinson calls in a missile strike to destroy them all and the three head back to the helicopter. Suddenly, the megalodon appears and begins eating the eggs, causing the crocodile to emerge from it’s hiding place. The missiles destroy the eggs but the two creatures get away, with the crocodile heading towards Miami. Trying to come up with a way to steer the creature away from major cities, Terry convinces Admiral Calvin to use the nearby nuclear power plant to create an arc flash, which drives the crocodile back into the ocean. After the megalodon destroys a sub and two helicopters that were transporting more eggs, Putnam comes up with an idea to lure the creatures into the Panama Canal and trap them in the locks, telling Hutchinson to search the wreckage of his ship to find some more eggs. The eggs work as a lure and both creatures reach the canal and begin fighting but their battle ends up destroying the locks and flooding the canal. Now loose in the Pacific Ocean, they discover that the crocodile has laid some more eggs, some of which have hatched and begin attacking Santa Monica. Meanwhile, a nuclear sub is following the megalodon and tries to attack it but the megalodon ends up swallowing the sub, making it an even bigger threat. Meanwhile, the mother crocodile has reached Hawaii and as Terry, Putnam, and Hutchinson follow it in a helicopter but the crocodile’s rampage ends up knocking the helicopter out of the sky. Hutchinson is unconscious after the crash and Terry and Putnam are forced to continue on their own. Seeing the megalodon and crocodile fighting, and the baby crocodiles being drawn to the cries of their parent, Terry decides to use his device to lure the creatures towards an active volcano area and trigger an eruption to kill them. Grabbing a nearby boat, they head out into the water and Terry manages to get his device to work, luring the creatures into the area. As the two monsters continue to fight, the two men head back to shore, catching sight of Hutchinson flying a repaired helicopter towards them. Terry triggers an explosion which sets off the volcano and the lava engulfs all of the creatures, kiling them all and the megalodon and the giant crocodile’s charred bodies fall into the volcano, still locked in combat. Hutchinson reports to the Lexington that the creatures are destroyed as she flies back to the ship with Terry and Putnam. Some time later, Putnam returns to the island he washed up on and meets up with Jean, who had also survived. He tells Jean about a giant lizard in Japan and asks if he wants to come along and Jean agrees, provided that there are no more boats.

Look, if it is an Asylum movie, I am going to like it and this is no exception. The acting was pretty decent for the most part but Jaleel White (Terry) was kind of all over the place emotionally, which he was supposed to as he was more or less in shock over the death of his fiance. The story was pretty good and there were a fair number of references to the original movie, such as a Japanese poster for the movie outside a mall and the name of the ship being the Gibson (referencing Debbie Gibson). The special effects were as cheesy bad as you could hope to expect, with some of the same clips seen over and over, primarily the two creatures fighting, in order to add some length to the fight scenes. If you want some good cheesy fun, then this is definitely worth watching.