I have often wondered what exactly the people who made the calendar/dating system had against February. I mean, why exactly did they decide to give it the short end of the stick as far as the numbe…

I have often wondered what exactly the people who made the calendar/dating system had against February. I mean, why exactly did they decide to give it the short end of the stick as far as the number of days in the month, then decide to throw it a bone every four years and give it an extra day. But enough about that. Today’s movie was the second entrant into the MCU and came out just one month after Iron Man. Hoping to cash in on the success of Iron Man, and hoping that comparisons to Ang Lee’s Hulk wouldn’t keep people away, the studio had high hopes for The Incredible Hulk.

The Incredible Hulk received mostly positive reviews, holding a 67% rating on Rotten Tomatoes. the consensus among the critics is that “The Incredible Hulk provides the action and excitement to please comic book fans and re-ignite this fledgling franchise.” The movie made over $263 million at the box office, and though it did not seem like it by the numbers, the movie was considered a success by the studio. Though the idea was for another stand alone film to be made, so far that hasn’t happened, but he is supposed to have more prominent roles in some of the phase 3 and 4 movies.

I know I am probably in the minority on this, but I like this movie. The acting was pretty good, with Ed Norton making a decent Bruce Banner, while Liv Tyler (Betty) and William Hurt (General Ross) were also good. I also like Tim Roth (Blonsky) but was bit disappointed in the change to his character. The story was pretty good and while they did change the details on how he became the Hulk, I liked how they chose to recap it during the opening credits instead of devoting a whole scene to it, since that has been shown in one form or another in the previous movie, not to mention the TV show and two cartoon series. I did like the couple of funny inside jokes that were in the movie, such as Betty giving Bruce a pair of purple pants, the cameo by Lou Ferrigno and the pizza owner being called Stanley (a play off of Stan Lee). I know some people might criticize this movie as being nothing but a lot of action but let’s be honest people. with a movie involving the Hulk, you don’t really need plot, you just want to watch him smash stuff, which this movie delivered. It’s not the best movie in the series but it is still fun to watch.

It’s just a super hero kind of day as I review this movie I watched a while back. Now when I was a kid, I remember watching rerun of the old Batman TV show on TV, as well as catching the movi… 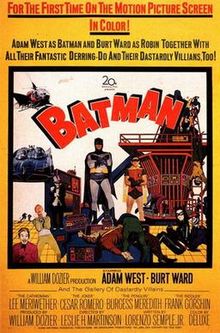 It’s just a super hero kind of day as I review this movie I watched a while back. Now when I was a kid, I remember watching rerun of the old Batman TV show on TV, as well as catching the movie they ma

Batman: The Movie was well received by the critics, holding an 80% rating on Rotten Tomatoes. The consensus among the critics is that “Batman: The Movie elevates camp to an art form — and has a blast doing it, every gloriously tongue-in-cheek inch of the way.” Producer William Dozier had wanted to do the movie while the TV series was running, to generate more interest in the show, but the studio didn’t want to cover the entire cost of the movie as opposed to only sharing the cost of the TV Show. Many of the characters from the show reprised their roles from the show with the notable exception of Catwoman, who was played by Julie Newmar in the first season of the show but due to scheduling conflicts, was replaced in the movie, and secodn season of the show, by Lee Meriwether. The movie was barely a success, as it only made $1.7 million off of a $1.5 million budget.

You absolutely can not help but laugh at how campy this movie is, which is why it is so much fun to watch. Every actor and actress were so good in their over the top performances that it is hard to list one as a favorite because they all did incredible jobs. The plot honestly felt like it was from and old school comic book, but filled with a lot more campiness. The scene with Batman trying to get rid of the bomb is definitely one of the funniest scenes to watch. The fight scenes were so over the top corny that they are just funny to watch, especially when you add the floating word balloons that would pop up when people would throw a punch or kick. Definitely a must see movie for any comic book fan, especially if you need something to watch and cheer yourself up.

Now I know what most of you are probably thinking. You are all wondering why I didn’t review today’s movie a couple of month’s ago. Well, there is a method to my madness, or at le…

Now I know what most of you are probably thinking. You are all wondering why I didn’t review today’s movie a couple of month’s ago. Well, there is a method to my madness, or at least my organizing ability. You see today’s movie was the first in an ongoing series of movies that have been dubbed the “Marvel Cinematic Universe”, which is why I waited until now to watch these movies. Now, I was a big collector of comic books as a kid, and to a lesser extent now, and mainly picked Marvel over DC, though there were some exceptions, and while I was not a long time reader of Iron Man or the Avengers, I did read enough of the comics to know enough about the character. Hearing that a live action movie would be coming out had me eager to see it so let’s see just how good today’s movie, Iron Man, really is.

Iron Man was highly praised by the critics, holding a certified fresh rating of 94% on Rotten Tomatoes. The consensus among the critics is ” Director Jon Favreau and star Robert Downey Jr. make this smart, high impact superhero movie one that even non-comics fans can enjoy.” The movie was a box office success, earning over $585 million worldwide off a $140 million budget. The movie would be the first in Marvel’s attempt to make a unified cinematic universe with the hopes of incorporating future characters into the film series and having them all be connected.

While I have always gone back and forth as to where I would rank this movie among the others, One thing that never changed is the fact that this is an incredible movie to watch. Robert Downey Jr. was hands down the best person to play this role and he did an amazing job as Tony Stark. Gwenyth Paltrow (Pepper), Jeff Bridges(Obadiah), and Terrence Howard(Rhodey) were also very good in their roles. The story was very good and did a good job of modernizing the origin as well as introducing the audience to a character that most people were not as familiar with as other super heroes. The special effects were really good and had a great blend of the CGI with the suits to mix with the real life people they were interacting with. A great action/comic book movie that really leaves you chomping at the bit for more. 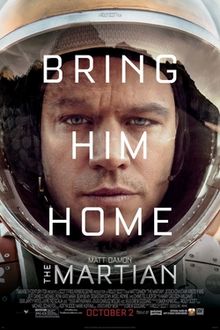 There is a running joke among my friends that I never buy/watch “good” movies, which is funny but not entirely true. The joke was made due to my love for B-movies (and some lower grade ones) and my tendency to buy such movies. My reasoning was always that everyone buys the big blockbusters and famous movies but the lower budget movies need love too, especially since I want them to continue being made. So anytime I buy one of the “good” movies, my friends get confused as to why I own it. Today’s movie will definitely have them scratching their heads as I review a fairly recent purchase, The Martian.

The Martian was highly praised by the critics, earning a critically fresh rating of 92% on Rotten Tomatoes. The critical consensus on the site is that it is ” Smart, thrilling, and surprisingly funny, The Martian offers a faithful adaptation of the bestselling book that brings out the best in leading man Matt Damon and director Ridley Scott.” The movie was projected to earn $172 million in the US but would wind up earning over $228 million in the US, and over $620 million worldwide, making it a box office success. The movie has been nominated for 7 Academy Awards. including Best Picture, Best Actor, and Best Adapted Screenplay.

This is a fantastic movie to watch. Matt Damon was great in this role, especially when he would go back and forth from being serious when facing the problems at hand, to more light -hearted and comical, in order to keep his spirits up and not fall into depression. All of the other characters were also good in their roles but this movie mainly focused on Damon and he held up to the pressure. The story was really good and I am sure it helped increase the sales for the book the movie was based on. The special effects were good and for the most part, the science was entirely plausible, with one or two exceptions. All in all, this is definitely one of the must see movies from 2015.