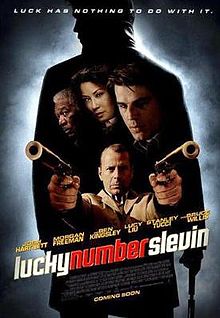 I really don’t have time for this stupid rain today. Aside from giving me a headache, I have my annual Pre-New Years party tonight and I am pretty sure most of my friends don’t want to have to deal with the rain. But enough complaining about the weather. Before I finish cleaning, I get to watch a fun movie today. With today’s movie, I honestly had no real expectations towards it when I went to see it but I ended up rather pleasantly surprised by how much I enjoyed it. So let me get right to today’s movie, Lucky Number Slevin, and then get back to cleaning.

The plot: A man is sitting at a nearly empty bus terminal when another man in a wheelchair starts talking to him. The man in the wheelchair then proceeds to tell the man a story about the Kansas City Shuffle and a man named Max, whose uncle tells him about a horse race that is fixed and he decides to bet on it. When the horse winds up dying during the race, Max finds himself owing the mob $22,000. Knowing that he is unable to pay them back, the new mob outfit that is setting up in town has Max and his family killed, even hiring an out-of-town hitman named Goodkat to kill his son, Henry. When the man asks if that is the Kansas City Shuffle, the man in the wheelchair says no and distracts the man, allowing him to snap his neck. Sometime later, Slevin Kelevra has just finished taking a shower at his friend Nick Fisher’s apartment when he Nick’s neighbor, Lindsey, shows up to borrow some sugar. After talking about what happened to Slevin and how Nick is missing, Lindsey thinks that Nick might be in trouble and says she will help look for him when she gets back from work. After she leaves, two henchmen show up looking for Nick and since Slevin is the only person in the apartment, they punch him and take him to see their boss. Slevin is taken to the penthouse of a downtown apartment and he meets “The Boss”, who says that Nick owes him $96,000 and he believes Slevin is Nick. When Slevin says he doesn’t have the money, The Boss says he will cancel the debt if he does him a favor. The Boss says that The Rabbi killed his son so he wants Slevin to kill The Rabbi’s son, The Fairy. After Slevin leaves, The Boss talks with Goodkat and questions why he is involving Slevin in this hit. After being returned to Nick’s apartment, Slevin talks with Lindsey some more but after she leaves, two of The Rabbi’s men arrive and force Slevin to go with them to see The Rabbi, whose headquarters is located right across the street from The Boss. Slevin meets with The Rabbi, who says he owes him $33,000 and he expects it within 48 hours. After Slevin leaves, The Rabbi talks with Goodkat, and says he believes Slevin when he says that he isn’t Nick, and Goodkat admits that he knows. Back at Nick’s apartment, Lindsey is fixing Slevin some lunch and says that she had checked out a hotel that had called Nick’s place earlier and followed a man named Mr. Smith to an apartment, and later, she saw Slevin leaving the apartment and has him explain what is going on. Realizing he has no choice, Slevin meets with The Boss and agrees to kill The Fairy and, as they are playing a game of chess, The Boss reveals details about The Fairy and his security detail. Later, Lindsey comes back to the apartment and tells Slevin that a bookie working for The Rabbi has been killed and she believes Nick set him up to take the fall for his debts since the only people working for the mob that knows who Nick is are now dead. That night, the two go to dinner at a restaurant frequented by The Fairy and Slevin manages to arrange a date with The Fairy but runs into a police detective named Brikowski, who questions what Slevin is up to. The next day, as he is getting coffee for himself and Lindsey, Slevin is picked up by Brikowski and questioned again, but the only thing Slevin tells them is his name. Back at the apartment, after saying goodbye to Lindsey, Slevin is approached by The Boss’s men and given a suit to wear and as they are leaving, it is shown that The Rabbi’s men have been shot. At The Fairy’s apartment, Slevin shoots The Fairy but when Goodkat enters the room, instead of shooting Slevin, he shoots The Fairy, who was pointing a gun at Slevin. Goodkat hands Slevin some car keys and while he gets Nick’s body (the man Goodkat killed at the bus station), Goodkat deals with The Fairy’s bodyguards. Afterwards, the two men rig the apartment to explode, faking Slevin’s death. Goodkat goes to see The Boss, killing his men along the way. Meanwhile, Slevin goes to see The Rabbi and knocks him unconscious. When The Rabbi comes to, he finds himself tied to a chair in The Boss’ office, next to the equally bound figure of The Boss. After The Boss tells The Rabbi that his son is dead, Slevin shows up and explains that he and Goodkat set this up in order to get to the two men. When they ask why he says it is revenge for what they did to his family. It is revealed that Slevin is Max’s son Henry, and The Boss and The Rabbi were the mob bosses that had his family killed. While Slevin is killing The Boss and The Rabbi in the same manner that they had his father killed, Goodkat shows up at the morgue that Lindsey works at and shoots her. Meanwhile, Brikowski receives a call from another cop, who gives him some information concerning Slevin when Slevin shows up in the backseat of his car and shoots him, as Brikowski was the one that killed Slevin’s mother. Later, Slevin is waiting at a bus terminal and Lindsey approaches him. It is revealed that Slevin had warned Lindsey about Goodkat and given her a bullet proof vest to use. When Goodkat appears, Slevin approaches him and explains that he didn’t think he would understand his wanting to keep her alive and Goodkat explains that he did, as the same thing happened with him and he hands Slevin his father’s watch and walks off.

Lucky Number Slevin was met with mostly mixed reviews from the critics, holding a 51% rating on Rotten Tomatoes. The consensus among the critics was “Trying too hard to be clever in a Pulp Fiction kind of way, this film succumbs to a convoluted plot, overly stylized characters and dizzying set design.” The movie was a box office hit as it made over $56 million off a $27 million budget.

Personally, I found this movie to be pretty entertaining. Josh Hartnett (Slevin) and Lucy Liu (Lindsey) were both really good and had good chemistry together. Bruce Willis (Goodkat), Morgan Freeman (The Boss), and Ben Kingsley (The Rabbi) had pretty limited roles but they were all really good as well. The plot was different, though not entirely original but the writing was really good. I thought a lot of the banter between the various characters was both clever and funny. There really wasn’t much action as this movie chose to go for more drama than violence. That’s not to say people weren’t killed but the only real action scenes were when Slevin killed The Rabbi’s bookie and when Goodkat killed The Fairy’s bodyguards. On the whole, this is one of those movies I enjoy watching and will sit down and watch no matter what part of the movie is on.