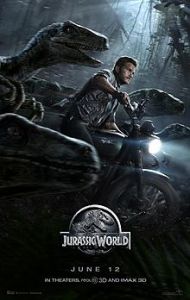 First off, this does not count as me buying a movie as I pre-ordered this months ago, way before I went on a movie buying hiatus. Second, I think it is a rather bizarre coincidence that I am watching this movie exactly one month after I watched the last movie. Ok, enough dawdling. Time to get back on subject. So when I first heard that a new Jurassic Park movie was being made, I was very excited but also a bit concerned since the last movie was not exactly earth shattering in my opinion. Luckily, the people behind this movie learned their lessons because I was blown away by this movie and it is the first movie in a while to take my money multiple times during it’s theatrical run. Here is today’s movie, the latest installment in the Jurassic Park franchise, Jurassic World.

Jurassic World was met with mostly positive reviews from the critics, holding a 71% rating on Rotten Tomatoes. While many praised the visual effects and director Trevorrow’s direction, some criticized the writing and tone of the movie. The 4th movie in the series was originally supposed to be released in 2005, following a trend of releasing a new movie every four years. However, problems in development as well as numerous rewrites caused the movie to be released ten years later, but the ten year difference was written into the movie to indicate how long the park had been open. Audiences were definitely ready to see a new movie in the series as it would set all sorts of box office records. It not only holds the largest opening weekend box office in the US at $208.8 million, but it also has the largest opening weekend box office worldwide at over $524 million (the first movie to reach over $500 million worldwide in its opening weekend), as well as the fastest movie to reach a box office of $1 billion (which it did in 13 days), all on it’s way towards a total box office of over $1.6 billion worldwide. And since it is still in some theaters, this number can still increase.

The original Jurassic Park was an absolutely fantastic movie and while I enjoyed both of the previous sequels, this movie is the closest to matching the original in a lot of ways. Chris Pratt did a great job in this movie and while I did think she was annoying at times, Bryce Dallas Howard was also good. I also liked the dynamic between Zach (Nick Robinson) and Gray (Ty Simpkins), showing a pretty normal “love/annoyed” relationship that exist between most brothers (and with my having 3 younger brothers, I am somewhat of an expert on that front). The story and writing were both really good, coming the closest to matching the impact and wonder I felt when I watched the first movie out of any of the sequels. Knowing that a 4th movie was originally supposed to be released in 2005, and having them loosely acknowledge that by saying the park had been open for 10 years was a very funny inside joke. I also liked the nod to Spielberg’s legacy by having the Mosasaurus eat a great white shark. Not only was this a reference to Jaws, but in a way, it could be seen as showing how the summer blockbusters have become even bigger since Jaws first started the trend. The visual effects were absolutely incredible, probably coming the closest to having dinosaurs on screen that look like actual living animals out of any movie I have seen, particularly the raptors. I don’t often say a movie is a must see, but everyone really must watch this movie at least once, or twice….actually, I think I am going to watch it again.