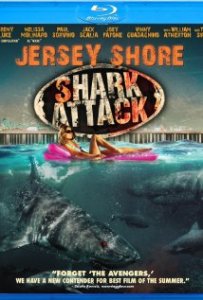 Hi folks. Joey is dealing with a migraine so I am bringing you today’s movie. Man, what a blast yesterday was. Soooo many shark movies. So many laughs. And what is on tap for me today but another shark movie. Granted, this is one of the 10 movies that was watched yesterday but who cares. It’s a funny movie and I will totally watch it again. Besides, how often do you watch a shark movie and totally root for the shark to kill people. I mean, I am pretty sure everyone does it the first time they watch this. After all, who wouldn’t want to see the cast of Jersey Shore get eaten by sharks, even if it is in parody. So let’s get right into today’s movie, Jersey Shore Shark Attack.

The plot: At Seaside Heights along the New Jersey shore, a young couple sneak onto a pier-side construction site to go swimming. Unknown to them, the site’s underwater drill has attracted a rare school of albino bull sharks, which attack and kill the two swimmers. The next morning, TC (“The Complication”) wakes up with a girl in his bed and his recent ex-girlfriend, Nooki, banging on his door. TC manages to get the girl out of his room just as Nooki enters and begins accusing him of cheating on her, to which he reminds her that she broke up with him the night before. The two argue some more before Nooki leaves and TC’s two roommates, Donnie and Balzac, decide to take him to their favorite bar for some drinks to celebrate the July 4th weekend. When they get there, TC notices Nooki sitting at a table with two of her friends, J-Moni and BJ, but Donnie and Balzac convince him to ignore her. The three guys wind up helping their friend, JP, host a wet t-shirt contest and when she sees TC dancing and kissing one of the girls, Nooki gets jealous and leaves, followed by her friends. However, the noise from the bar attracts the attention of Bradford, Spencer, and Penelope, members of the local yacht club, who head over to the bar, and after a heated exchange, a fight breaks out in the bar. JP hits Spencer in the balls and runs off, with Spencer and Bradford chasing after him. TC, Donnie, and Balzac go to help him but are delayed by TC’s dad, the local sheriff. Meanwhile, JP winds up being chased onto the drilling platform and he ends up jumping into the water, where he proceeds to taunt Bradford and Spencer, but they refuse to go in after him. After they leave, JP is attacked and killed by a shark and when TC and the others get there, the only thing they find is JP’s chewed up hat that TC discovers. Since his dad doesn’t believe him that something happened to JP, TC, Donnie, Balzac, and the girls decide to do something themselves. They head down to the breakwater, where they discover an overturned boat and the partially eaten body of a local fisherman, just before they see a bunch of sharks entering the area. Using a bunch of fireworks, they manage to kill one of the sharks, but when the rest start to swim away, they decide to chase after them. TC leads them to the marina, where they attempt to steal Bradford’s boat, but when they see a shark in the harbor, Donnie accidentally drops a lit firecracker into the bag of remaining fireworks, causing the boat to explode. At the police station, TC tries to explain to his dad about the sharks, but his dad doesn’t believe him. They try going on the radio, warning the yacht club, and even asking Joey Fatone to warn everyone but nobody believes them. However, when Joey Fatone begins his performance, a shark leaps out of the water and kills him. At the bar, TC and the guys are complaining about nobody believing them and the owner, Captain Sallie, tells them a story about a past instance where the Jersey shore was attacked by a group of sharks. After listening to the story, the guys are interrupted by J-Moni, who has them follow her to the yacht club, where a drunken Nooki is dancing on the bar in front of Bradford. After getting her down, the two argue again before TC and the guys leave, followed by the girls. The next day, the shark that ate Joey Fatone is killed and the beaches are opened, but the sheriff, finally believing his son, decides to increase the watch on the beach, with TC, Donnie, and Balzac helping. Meanwhile, Bradford, in an attempt to get back at TC, invites Nooki to come out on his yacht for the day, and disregarding the warning about sharks, set sail for the nearby cove. At the beach, an accident at the drill turns it on, causing the sharks to begin swarming the beach and attacking swimmers. TC and the guys help to rescue some of the beachgoers but learn that Nooki is at the cove with Bradford. With his father’s permission, TC goes to the police station for some guns, then takes the police cruiser to go after Nooki. When they arrive, they discover the yacht is under attack by the sharks, with several people already being killed. TC and the others begin firing at the sharks, injuring several of them and making them swim away. TC goes on the yacht and finds Nooki is stuck and when he gets her free, a shark attacks them but TC kills it. After rescuing everyone, they head back to the harbor, where they discover more sharks attacking the pier, the kids begin shooting the sharks, with TC even using a speargun to save his father. TC then shuts off the drill, sending the remaining sharks back out to sea and the kids all celebrate with a “Guido” chant, but as a newscaster is reporting that the city is safe, a shark leaps out of the water and kills him.

This was a very entertaining movie, mainly because it made fun of one of the stupidest shows on TV in recent years. The acting was so over-exaggerated in the whole “Jersey guido” speak that it made the movie very entertaining. The story was admittedly a little weak but pretty funny. The only problem was that the sharks did not kill off more of the people. I mean, that’s what everyone wanted to see. The sharks honestly did not look as good as sharks in other movies, Their heads just looked to flattened. I also thought it was funny that they only really killed 3 sharks. Every other shark was just shot in the dorsal fin but didn’t really die. It has it’s faults, but it is still a funny movie to watch.