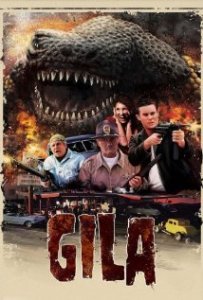 So a few years ago, I heard talk about two classic B-movies getting remade. One movie was actually going to be a sequel to the original movie while the other would be a straight up remake. Well, I put off buying them for a while, and then put it off again, and again, but finally decided to go ahead and get them. Today’s movie is a remake of the cult classic movie, The Giant Gila Monster. Now, aside from all of the singing, I always thought the original movie was entertaining so that, plus the fact that Jim Wynorski directed it, makes me wonder why I didn’t pick up today’s movie, Gila!, a lot sooner.

The plot: A teenage couple are making out in the guy’s car when they are attacked by a giant gila monster. Some time later, a group of kids are drag racing, with Chase Winstead winning the race, when another car pulls up. The driver, Waco Bob, is an old acquaintance of Chase and challenges him to a race but Chase easily beats him. Meanwhile, two workers are illegally storing some drums of chemicals in an old cave when the gila monster appears and smashes one of the drums, splashing the two workers with the chemicals and causing their skin to melt. The next day, the mayor calls Sheriff Parker and orders him to find his missing daughter, Betty (the girl that was attacked at the beginning of the movie). At the repair shop that Chase works at, Carla (Waco Bob’s “girl”) shows up to flirt with Chase but Waco Bob shows up and starts to fight with Chase. Sheriff Parker shows up and makes Waco leave, then asks Chase and Lisa (Chase’s girlfriend) to help him look for Betty and Don. They find Don’s car and a blood covered purse belonging to Betty. Wilma, the sheriff’s deputy, arrives and tells the sheriff about all the phone calls she has received about missing live stock and shots fired at a farm. Sheriff Parker leaves Wilma to process the scene while Chase gets the tow truck to tow the car and he goes to the farm. When the sheriff gets there, he finds the farmer, Karl Swenson, outside his barn, talking about something big attacking him. Sheriff Parker radios his deputy to meet him at the farm but on her way, a car crashes right in front of her and as she is calling it in, the gila monster attacks and kills her. Meanwhile, Chase is getting ready to tow Don’s car when he finds Betty hiding in some bushes and takes her to the hospital. Chase and Sheriff Parker head back to the crash site but find no sign of Wilma. Chase tells Sheriff Parker about seeing something strange which, given the strange events recently, makes the sheriff anxious to get out of there. The next day, the gila monster derails a train while the sheriff ends up getting confirmation that a giant gila monster is somewhere in the town. Sheriff Parker and Chase figure out that the monster might be hiding in a nearby cave and when they go to investigate, the discover the chemical drums as well as giant crickets. When they accidentally wake the monster, the head back outside and use some nitro glycerin to blow up the cave entrance. Thinking they trapped the monster, Chase heads back to town to attend the town dance but after Carla serenade’s Chase, Lisa and Carla begin fighting until Chase and Waco manage to separate them. The next morning, the gila monster is spotted traveling along a gully so the sheriff, along with Chase, Lisa, the mayor, Mr. Compton, and several of Chase’s friends get all of the guns from Compton’s storage closet and try killing the creature before it reaches town. However, all the do is make it change direction towards Chase’s house. Chase and Lisa head back to Compton’s shop to get the rest of the nitro and then head to his house to rescue his mom and sister. When the family’s car won’t start, Chase is at a loss as to what to do but suddenly, Waco shows up and offers to get the girls out of there. Chase then places the nitro on the front of his car and drives it straight at the lizard, jumping out at the last minute while the car explodes, killing the monster. That night, Chase and the other’s celebrate with a Christmas party at his place, unaware that another lizard is walking through the yard.

While I did enjoy this movie, I think my general stance on remakes still holds true. The acting was decent at times but there were some times where people were more over the top than they needed to be. The plot was pretty much the same as the original movie. I did like the fact that instead of doing a modern take on the movie, they basically set it in the same time period as the original. Yes, there were some differences and that is to be expected but they didn’t really take away from the story much, although the Carla flirting angle seemed weak to me. One thing that I did find odd was the fact that for a Jim Wynorski film, there was surprisingly no female nudity. The effects were not the greatest but they were decent, although the lizard’s walk looked a little weird. I honestly expected a little more but it was still entertaining to watch.