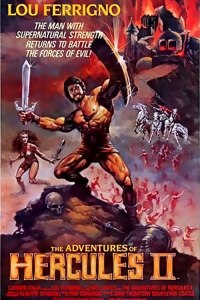 Movie producers amaze me sometimes. So at the same time that Lou Ferrigno was filming the previous movie, he was also filming a movie called The Seven Magnificent Gladiators. However, they wanted the director to film some more scenes in order to save it because it was “unwatchable.” So the director did and when the producers saw what he had filmed, they wanted him to write a story around what he had filmed and and film some more scenes without telling Ferrigno it was for a sequel. Thus, we have the story behind today’s movie, The Adventures Of Hercules.

The plot: When 4 renegade gods steal the seven thunderbolts of Zeus, they unleash a series of evils on the Earth. Zeus sends Hercules down to Earth to retrieve the thunderbolts, but the renegade gods have transformed them into monsters, making the task more difficult. Upon arriving back on Earth, Hercules is immediately attacked by a monster but he defeats it to reveal the first thunderbolt. Wanting to stop Hercules, the renegade gods revive King Minos to kill Hercules and prevent him from retrieving the thunderbolts. Hercules continues his journey and meets up with Urania and Glaucia, two sisters that are trying to save their village from the evil high priest and his scarifices. After running from some slime people, they encounter the second monster Euryale, a half-scorpion monster that can turn it’s victims to stone. They then travel to a haunted forest where Hercules defeats a demonic knight to retrieve the third thunderbolt. While Hercules and Urania travel underwater to retrieve a magic balm that will help him defeat the fourth monster, Glaucia is captured by the high priest and prepared for sacrifice to the monster. Urania saves Glaucia while Hercules defeats the beast and obtains the thunderbolt. The renegade gods are becoming nervous and worried that Hercules will find all of the thunderbolts when Minos appears before them and, having already killed one of the gods, kills two more before capturing the 4th god, Hera. While Urania consorts with the seers, Hercules and Glaucia are attacked by a group of Amazons and Hercules is captured. Hercules is brought before the Queen of Spiders but before she can kill Hercules, Urania manages to wake Hercules and he strangles the queen, revealing her to be the 5th thunderbolt. The three then travel to space, where they discover the renegade gods had hidden the 6th thunderbolt in a rock. Suddenly, Glaucia grabs Urania and holds a knife to her throat and Minos appears, informing them that Glaucia had died a while back and this was a copy. Hercules and Minos proceed to battle each other, with both of them becoming beings of light at one point, and Hercules eventually defeats Minos. Then, with Zeus’ help, Hercules manages to grow to giant size and saves the Earth from colliding with the moon. Urania then reveals to Hera that she knows that Hera hid the final thunderbolt inside her (Urania’s) body and begs her to give her the kiss of death in order to restore the thunderbolt. Hera does what Urania asks and, with his powers restored, Zeus honors both Urania and Hercules by letting them live as gods among the stars.

As crazy as the first movie was, this was even better…in that awesomely bad sense. Again, the acting was pretty over the top and the dubbing was off at times. The story was just plain ridiculous and mixed up so many different myths, as well as stealing from other movies (such as Star Wars & King Kong) that it made no sense at times. The effects were definitely not the most mind blowing you would ever see. They were pretty laughable at times, especially the parts where Minos and Hercules transformed into figures of light, not to mention every time Hercules hit someone there would be a flash of light. This isn’t a good movie by normal standards but it it a whole lot of fun to watch.