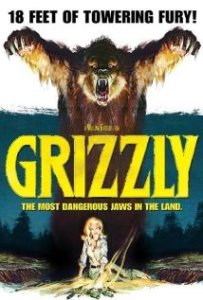 The late 70’s was an interesting time for the sci-fi/horror genre, because a lot of movies were trying to copy the same formula that Jaws used. Take today’s movie for example. Ironically, the first time I saw this movie was years ago during an “animal attacks” week of movies which started with Ben, ended with Jaws, and had this movie sandwiched in between. Even back then, I noticed that a lot of the story seemed similar to Jaws. But see for yourself as I review today’s movie, Grizzly.

The plot: Two backpackers are preparing to break camp when one of them is attacked by an animal. The second girl manages to hide in a nearby cabin but the creature destroys the cabin and kills her as well. Chief Ranger Michael Kelly and photographer Allison Corwin accompany another ranger to look for the girls when they discover the bodies. The coroner informs Kelly that the girls were killed by a bear. Park Supervisor Charley Kittridge argues with Kelly’s wanting to close the park but agrees to have all of the hikers/campers out of the high mountain area but let people stay in the low area. He also blames Kelly and Arthur Scott, a naturalist that helped Kelly move all of the bears out of the area. Scott claims that the bear is not one of the ones that they moved, but rather an abnormally large grizzly. When a ranger and another camper are killed, Kelly and Kittridge argue again about closing the park and Kittridge instead lets hunters into the park in the hopes that they will kill the bear. Scott gets fed up with all of the political roadblocks Kittridge is using and decides to go after the bear himself. After two more people are killed and a child is severely mauled, Kittridge finally agrees to close the park and Kelly, along with helicopter tour pilot Don Stober, go hunting the bear. The two men use a deer carcass as bait but the bear runs off with the men chasing it, then it circles back to take the carcass. Scott comes across the remains of the carcass and plans to drag it towards Kelly and Stober’s position but the grizzly kills his horse and injures Scott. Scott awakens later to find himself half buried but when he gets up, the grizzly kills him. Kelly and Stobes locate the bear and try killing it but the bear kills Stobes before Kelly is able to use a bazooka to put an end to the killer beast.

Ok, let’s go ahead and compare Grizzly and Jaws. 1) They both have an experienced peace keepers that try to protect the people in their care. 2) Both of those peace keepers efforts are hampered by political superiors who refuse to close the endangered areas. 3) A bounty is placed on the animal which results in lots of people trying to kill the animal. 4) Both animals are killed in overly dramatic, explosive ways.

This was an entertaining movie.to watch but it is an ok movie at best. Aside from the similarities to Jaws, the story was pretty weak. Christopher George and Andrew Prine were both pretty good, and Richard Jaeckel was decent but nobody else really stood out. The effects when it came to the bear were pretty bad at first. You never see the bear for the first 30-40 minutes. Anytime the bear attacks someone, all you would see was a clawed arm (and a pretty fake one at that). Once you actually see the bear, there are a number of times where the color of the fur changes from black to brown, all in the same sequence. A couple of filming flaws but like I said, this is an entertaining movie.