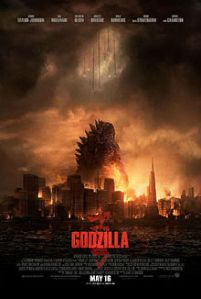 So I finished with the the Toho Godzilla movies and now it’s time for the American version. Man, when the trailers for this movie first came out, I was excited. Obviously, I was going to see it as soon as it came out and of course, my younger brothers Chase and Blake, who grew up watching my Godzilla movies with me, were going to be joining me. But was surprising was the number of my friends who were interested in seeing this movie and , in their words,”it would feel weird not to watch it with you.” So a large group of us went to see it, and while I was focused primarily on the movie, I did ntice my friends looking at me every now and then to see my reaction. It was a fun night when we saw today’s movie, Godzilla (2014).

The plot: In 1999, Dr. Serizawa, a scientist for Project Monarch, and his partner,Vivienne Graham, is sent to the Philippines to investigate a large cavern that was discovered during a mining accident. Inside, they discover the the skeleton of a giant animal, along with two egg sacs, one dormant, but the second showing signs of having hatched from it and tunneled out of the cavern. In Japan, a series of seismic activity causes Joe Brody to have a team, including his wife, check the reactor at the Janjira Nuclear Plant when a massive tremor causes a breach in the reactor and Joe is forced to seal the chamber with his wife and her team inside as the plant collapses. 15 years later, Joe’s son, Lt. Ford Brody, has just returned from deployment as a Naval EOD when he is forced to go to Japan to help out his father. Joe is convinced that the truth behind the disaster is being covered up and convinces Ford to go back to their old home so he can retrieve his data but they are captured by the police. The police take them to the remains of the Janjira plant where they are detained while Joe warns that the same thing that happened 15 years ago is going to happen again. Inside the reactor core, a giant egg suddenly hatches, releasing a giant winged monster called a MUTO (Massive Unidentified Terrestrial Organism) which destroys the much of the area before taking flight. Joe dies as a result of injuries suffered from the MUTO’s attack while Dr. Serizawa and Vivienne are flown out to join a Navy task force that is set to hunt the monster down. Dr. Serizawa explains that Project Monarch was designed to study Godzilla, a giant creature that was discovered in 1954 and the nuclear testing done ing the area was actually an attempt to kill it. Ford tells them everything his father knew about the incident and is then flown to Hawaii so he can go back to his family in San Francisco. However, the MUTO arrives in Hawaii and causes an EMP which blacks out the airport. As the naval fleet arrive in Hawaii, they witness Godzilla arriving to begin battling the MUTO but the MUTO winds up fleeing with Godzilla chasing after it. After studying Joe’s data, Dr. Serizawa realizes that the second egg has hatched, releasing a second MUTO, this one being female, that is heading west through Las Vegas. Ford goes with a military team that is using a nuclear warhead to lure the MUTO’s and also destroy them, but the female MUTO destroys the train and eats the warhead. A second warhead is flown into San Francisco but the male MUTO steals it and meet with the female so that they can make a nest for their eggs. Godzilla arrives in the city and begins battling the two monsters while Ford and a military team try to disarm the nuke or get it out of the city. As the team takes the nuke down to the docks, Ford releases the fuel from a tanker truck in order to cause an explosion that destroys the MUTO eggs. As the female MUTO goes after the nuke, Godzilla manages to kill the male MUTO but is brought down by a collapsing building. Ford manages to get the boat with the nuke out to sea with the female MUTO hot on his heels. Just before she gets to the boat, Godzilla grabs the MUTO and releases it’s atomic breath down the MUTO’s throat, severing its head. As the citizens are assessing the damage and trying to find survivors, the news shows footage of Godzilla leaving the city and returning to the ocean.

Godzilla  received generally positive reviews from the critics, earning a 74% rating on Rotten Tomatoes. While most of the critics praised the visual effects and the imagery of the movie, several critics criticized the lack of development in the human characters. Another criticism, and one which I share, is that there was not enough screen time for Godzilla in this movie. However, people definitely wanted to see this movie as Godzilla would earn $93.2 million in it’s opening weekend, and $528 million worldwide during it’s release.

Now I know some of you might be wondering why if I am such a big Godzilla fan, why am I not reviewing the 1998 film. Let me explain something right now. I WILL NEVER OWN THAT PIECE OF SHIT MOVIE, EVER. I don’t consider it a Godzilla movie and neither does almost every other Godzilla fan that I know of. So there.

Now as for this Godzilla movie, I really liked it. I thought the plot was pretty good though I do think it tended to focus more on pointless human drama as opposed to the monsters. The special effects, as well as the visual effects in general, were spectacular. The MUTO’s design was unique in some aspects, although the flying MUTO did look a bit like Gyaos from the Gamera movies. While the Godzilla design was a little bulky, it did manage to combine elements of the classic look with it’s own uniqueness to make a great looking monster. I also liked how they made Godzilla into a force that kept the balance in nature. The main thing I didn’t like about this movie was that they focused more on all the humans instead of the monsters. That and the fact that there wasn’t a lot of Godzilla in the movie. I actually liked the build up to when Godzilla actually showed up, but once Godzilla did make it’s appearance on screen, he was shown very briefly before cutting away to another scene. During the final battle with the MUTO’s, they kept cutting away from the battle to show other things instead of focusing on the fight. Still the movie was very entertaining and way better than the U.S.’s previous attempt at a Godzilla movie.