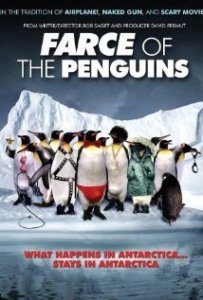 In 2005, a documentary called March Of The Penguins came out that had everyone talking about it. Narrated by Morgan Freeman, the documentary chronicled the mating habits of the emperor penguin and would wind up winning the Academy Award for Best Documentary for 2005. So when you have a critically acclaimed documentary about a bunch of birds that has everyone talking about it, you just know that someone out there is thinking of a way to parody it. Luckily for us, Bob Saget did just that when he brought us today’s movie, Farce Of The Penguins.

The plot: Carl and Jimmy are two best friends that are preparing for the yearly mating ritual. But while Jimmy just wants to go there to get laid, Carl is hoping for a more meaningful relationship. As they make the long trek, the run into all sorts of interesting characters including Steve, the snow owl that doubles as a therapist, a shifty fox that tries to sell them anything, a gang of threatening sea lions, as well as several other crazy penguins. When they finally make it to the mating grounds Carl is worried that he won’t be able to find anyone. But when he sees Melissa, he knows that this is the penguin he is destined for.

Folks, you may have heard this before but in case you haven’t, let me bring to light one important fact. There is a BIG difference between Bob Saget and Danny Tanner, the character he played on Full House. Danny Tanner was your typical, wholesome, normal, suburban father. Bob Saget is probably one of the dirtiest minded comics in entertainment. So if you were expecting a family friendly movie, boy are you in for a surprise. This is 80 minutes of foul language, sexual comments and innuendo, and animals having sex.

I love this movie partially because of how wrong it is and partially because Bob Saget, for all his dirty mindedness, is incredibly funny. There were so many funny lines during this movie, starting at the very beginning when the narrator, voiced by Samuel L Jackson, made a statement about missing big bushes. I remember watching this with some friends at my house and I thought my friend Chris was going to die from laughing so hard. This is just a great movie to put on and laugh at.

So if you want a laugh, and you are not easily offended, then you should definitely watch this movie.