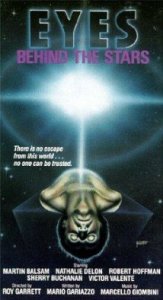 So not only is today’s movie another film from the Sci-Fi Invasion set, but it is also an Italian movie. I might have to go through and see just how many Italian movies I own. While the Italian horror movies have a tendency to be some of the most disturbing movies I have seen, the sci-fi movies tend to be different, which is odd because usually sci-fi and horror can go hand in hand. Still, let’s see what today’s movie, Eyes Behind The Stars, has in store for us.

The plot: Peter, a photographer, and his female model Karin are taking doing a photo shoot in the woods when they get the feeling they are being watched and decide to leave. After developing the pictures, Peter heads back out to the woods to take some more pictures and finds himself captured by aliens. Karin goes by Peter’s place and after seeing the developed pictures, calls her friend Tony to look at the pictures and after seeing the pictures, Tony decides to take the negatives for further study. Later that night, Karin is also abducted by aliens. As Tony tries investigating what is going on, he finds his efforts hindered by the military, while a mysterious group known as the Silencers try to keep quiet the mere existence of the aliens.

Not quite what I was expecting, but this was a halfway decent movie. The story was pretty good and actually had an X-Files type feel to it. However, that was really the only good thing about the movie. Since it was an Italian film, it was obviously dubbed into English and the dubbing was terrible. The actors were mediocre at best and none of them really stood out. One surprising thing was that there wasn’t any nudity and hardly any violence in this film, which is odd since Italian films tend to go for the shock value to the point of being almost exploitative at times. I’m curious how this movie could have turned out if they had a better budget.

So while the story was good, the other aspects of the film did not help this movie so it is up to you if you want to watch.